My buddy Larry ran another play-test of Super-Five and it went really well. We are all members of Xavier's School ... sort of new new new new new mutants. This game was part-two in our adventure. In the first part we met some of the other members of the school. I met the other players, a female mutant with a sort of shadow casting ability, and another female mutant with like super-human spacial awareness that allows her to do incredible things. I am Ricky O'Shea a redheaded kid from Cardiff who has transplanted to the school.

My body is covered in a kind of "repulsor-ray force field" that pushes things away from me if they come at me just a bit too hard or too fast. Also, when I jump, the field causes me to bounce when I hit the ground or pretty much anything else, so think Bouncing Boy from the Legion of Superheroes. I have trouble controlling the field effect however (my weakness) and ended up bouncing all over the school cafeteria on my first day. 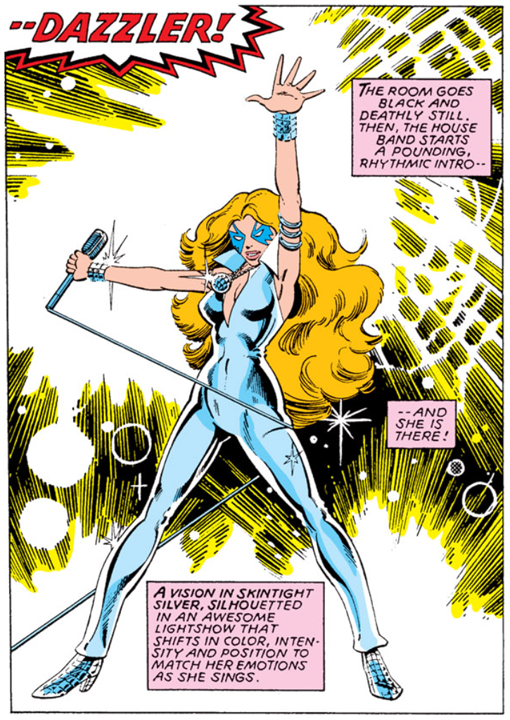 The buzz about the school was about an upcoming concert, Dazzler! Everyone at the school was in attendance when Magneto attacks with his team of evil mutants! Gosh! As new members of the school, we know when to high-tail it to safety! As Ricky (code named: Rebound.) and his new friends seek shelter, the battle rages and there is a huge explosion!

The one in our party who actually paid attention during orientation remembers mention of a tunnel that accesses the sewers that is to be used in emergency to evacuate the school and we head there. Shortly after making it "safely" to the sewers we encounter some Morlocks!

There's one Morlock that things stick to (my antithesis!) and his mother(?) a mind controller. We end up battling these misunderstood mutants but not before discovering that we suddenly have to sing everything. That's right, sing! It's like that Buffy episode, "Once More With Feeling." but, you know of a decidedly lower musical quality.

About this time Prof. X appears in our brains and shows us an image of a device, now broken into pieces, that was apparently part of Dazzler's stage show techno equipment. The device is apparently responsible for our current "singing" dilemma and the pieces of it must be found.

Anyway, we battle the Morlocks between musical numbers and eventually defeat them to discover one of the pieces that we seek is stuck to the sticky Morlock and we retrieve it.

We leave the sewers not sure where to go next, but the shadow casting mutant, feels a "pull" city-ward, so we follow her lead. Shadowgirl (not her real name) leads us to Cloak (of Cloak and Dagger fame) the source of the "pull" but he doesn't stick around to talk ... "sing" with us. Oh, and Dagger isn't with Cloak, he was running alone.

As Cloak was our only lead, we try to follow him! While bouncing around NY we draw the attention of Spider-man! Yay! We tell him about the broken music device and following Cloak. Spidy asks us about Dagger whom we don't know about. He swings off in search of Dagger while we continue our pursuit of Cloak. This was where the first session ended. 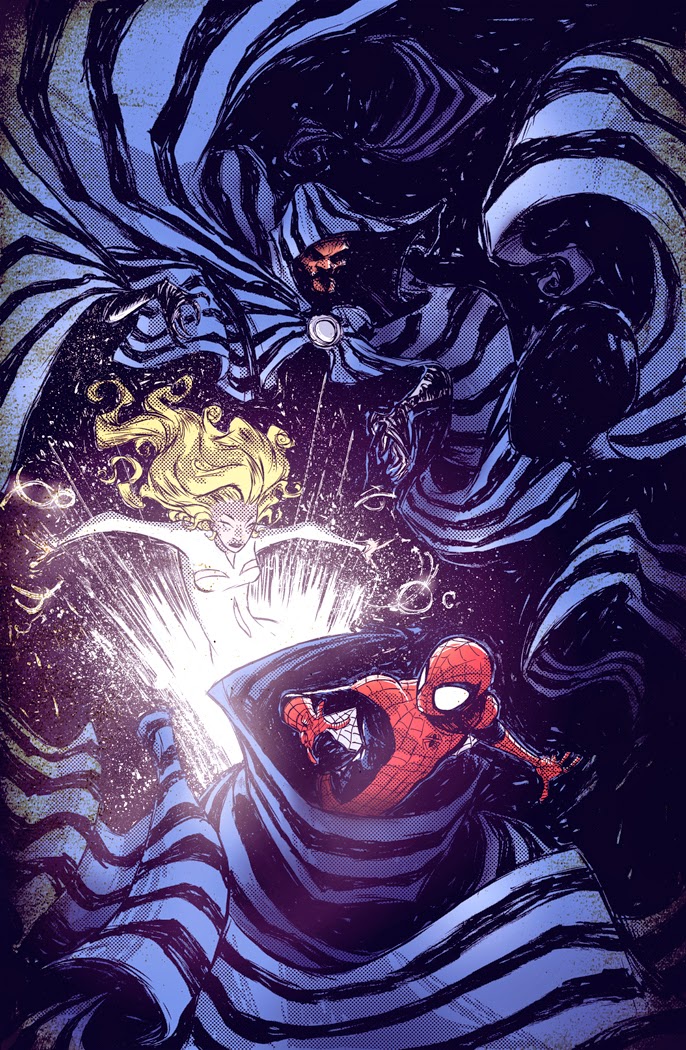 Some of the fiddly (what I thought were clever) new game mechanisms just weren't working. Over the next few weeks I went back and reworked Super-Five in preparation for the next play-test.

By the time we played this second half, I had not only cleaned up the mechanical problems but completed the big bunch of random tables needed to make random supers (for those so inclined) bringing the whole package much closer to being the game that I have been striving for.

Larry informed us that the "singing" effect was still a factor, but that we as players and he as GM didn't have to sing anymore. We were all a bit relieved to hear this. It was fun, but a one game only thing. This game starts a little shaky ... apparently, Shadowgirl (man I need to find out what her name is) can't "sense" Cloak anymore and we are left to wander. Eventually, we spot a kind of unnaturally deeper darker shadow draped over and up the side of some buildings. My character leaps right into the center of it. This might not have been the wisest of moves.

Kudos to Larry for writing an encounter designed to take place entirely "inside" Cloak. It was a pretty novel concept. It seems the one piece of tech that we had found glows like crazy and the second one (now lodged inside Cloak) was the same ... and it's glow was feeding Cloak like a drug ... in a bad way! Shadowgirl to the rescue here as she was able to move around inside Cloak when we really couldn't. She was able to get the piece away from Cloak and we all ran like crazy back towards Spidy and Dagger with Cloak in hot pursuit! We made it and with C&D reunited things got much to the better quickly.

We returned to the school with the pieces that we found, but couldn't find a soul! We made the mistake of going into the danger room and we had to fight some drones there because someone had left the program running. We triumphed ... mostly because of Shadowgirl again, because her dice were on fire! She couldn't throw a bad roll.

We got to the heli-pad area and something about the presence of the two missing pieces there caused Dazzler to come back into phase! That's right, the place was abandoned because everyone had been shifted out of phase by the weird disco-ball thingy (Larry didn't describe it as Disco-Ball like at all ... it was some kind of advanced tech, but Disco-Ball is how I imagine it.) Dazzler appears just in time to scream, "Look Out!" As we are attacked by Klaw!

And the final piece of the gizmo? Inside Klaw's klaw of course, making it extra powerful! We manage to help Dazzler defeat Klaw and bringing the three pieces of the Cursed-Disco-Ball-McGuffin together dispels the phase and the singing effects. The villains who attacked the concert are pretty disoriented and decide to beat feet, and we saved the school. Ricky asked Dazzler to the Prom, but it was kind of an off the cuff thing and Larry laughed it off. So, I don't think it'll happen. Oh, well.

The second half of this adventure was a big success! And amazingly I haven't rewritten a single word of the Super-Five game since. I didn't feel the need. It seems like Super-Five might be getting to the place where I want it. And, I couldn't be more pleased!

I will learn more as we play more, but things feel really good right now. I still want to infuse more examples, both to augment the rules and a bunch of character examples. I also want to include a sample adventure or two to demonstrate how everything works together, but the rules are in great shape at the moment and I am very optimistic!