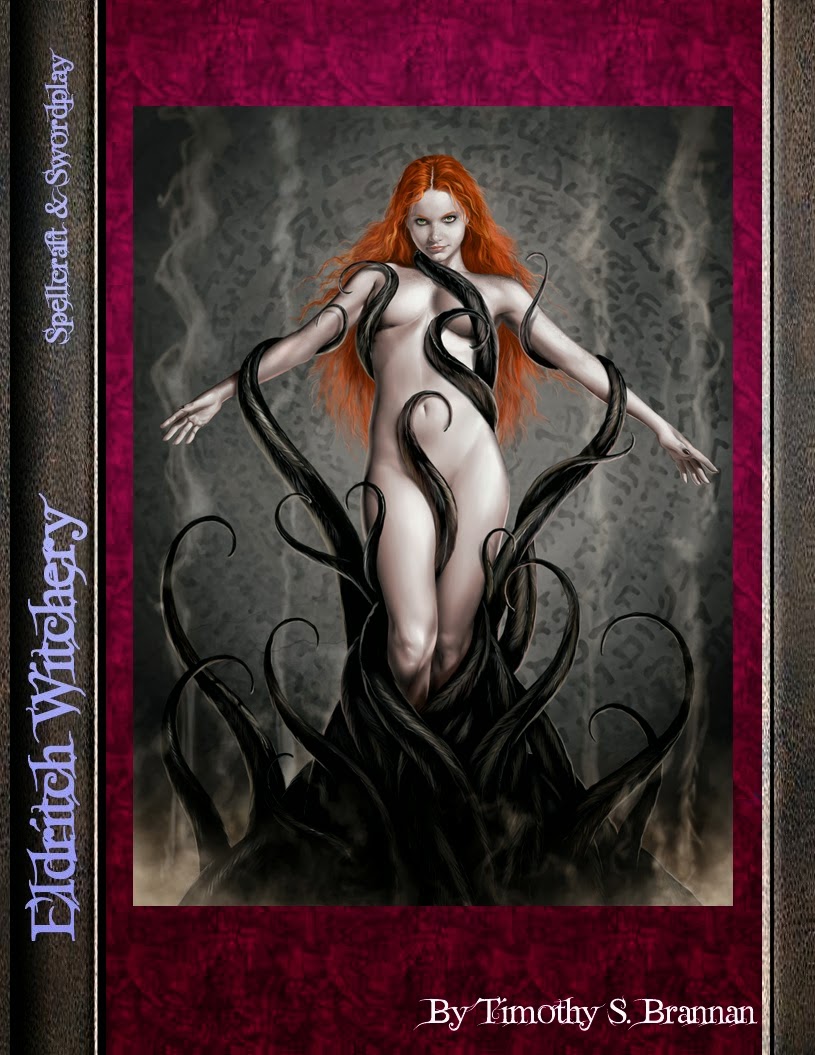 Among the blogs that populate my reading list is Tim Brannan's - The Other Side Blog which has been nominated for an Ennie this year by the way, so be sure to stop by and share your enthusiasm for your favorite RPG blogs, products, and what-not. Voting is open now.

Anyway, I believe in supporting my fellow RPG designers whenever I can and I had long been eyeing Tim's Eldritch Witchery (the cover is quite vexing) source book for Spellcraft & Swordplay. But, alas ... I was not familiar with Spellcraft & Swordplay. I was pretty sure it was some kind of OSR retro product, but beyond that I had no idea. So, I decided to check it out.

Upon logging in at DriveThru RPG I found that I had already downloaded the free Basic version of Spellcraft and Swordplay. It must not have made a great first impression, because I had no recollection of it. I decided to take another look. First, I have got to say that upon cursory glance S&S does not make a great first impression. It is easily mistaken for just another retro-clone, and its manifestation as a publication isn't the most attractive. As someone who owns more attractive offerings like Labyrinth Lord, and Castles & Crusades, and Lamentations of the Flame Princess it's easy to see how I had shrugged this one off. But, I was determined to give this book a serious second look, so I settled in for a read. I am really glad that I did.

S&S has been around for awhile and there have been other reviews written about this product. But, despite my interest in retro OSR products, I had never read it, so I am going to share my impressions here, because if I hadn't read it, there are very likely a handful of others out there like me, and maybe I can reach one of them. First, S&S isn't your typical retro-clone. It's a "what if" kind of product. Like Dave Bezio's X-plorers which imagines what the game would have looked like if Gygax and Arneson had been inspired by science fiction instead of fantasy.

S&S imagines what AD&D might have looked like if its core mechanic had been based on the rules for Chainmail (miniature wargame rules that OD&D was originally meant to use) instead of the system that is now the d20 system, (and originally offered as an alternative for new players without access to Chainmail.)

Go back and read that paragraph again. Are you rushing over to DriveThru RPG right now to buy your copy? Hmmm ....

I'm sorry, but on the face of it, S&S seems like such a ... grognardy ... only the most hardcore of old school geeks would even care ... kind of premise, that I can't wonder if it wouldn't leave a large portion of its RPG gaming audience cold. The thing is ... S&S is kind of ... amazing.

By jumping all the way back to square one and then rebuilding OD&D from a "if we knew then what we know now" kind of perspective S&S manages to pull together a solid working old school D&Desque RPG that is better than it should be. The rules for S&S are clean, easy, familiar and yet new. The system uses a d6 (and my prediliction for d6 games is well known) and still manages to feel like D&D.

S&S is a solid retro-style offering. It may become my old-school game of choice. I fear that its grognardy sounding premise and painfully archaic presentation may limit it's audience to only the most hardcore OSR geek. And, as the game incorporates many modern ideas, I fear that audience might interpret S&S as something of a mixed bag.

I feel S&S could use a facelift to raise its visibility in the OSR marketplace. It's an awesome game deserving of a place on your bookshelf. It has print versions available which is a must for me, and I have purchased the core book, Tim's Eldritch Witchery, and the Monstrous Mayhem supplement (all print plus PDF for me.) And anxiously await their arrival.

The core book contains lots of cool options that you don't get to see in the free version and I fear the free version might do the game a bit of a disservice. As I said, I skimmed it and then kind of passed it on when I first got it. I urge people to take another look at this game, and read it. Then read it again. S&S is a diamond in the rough. A first class OSR masterpiece hiding in coach. It shouldn't be over looked.

Eldritch Witchery looks to be even more awesome and to escalate the game even further, especially if you are a fan of pagan witchcraft and wish that someone would take a serious look at that art and apply it to D&D. There is a lot to Eldritch Witchery and I have barely scratched its surface, but I plan to write a follow up later so stay tuned.