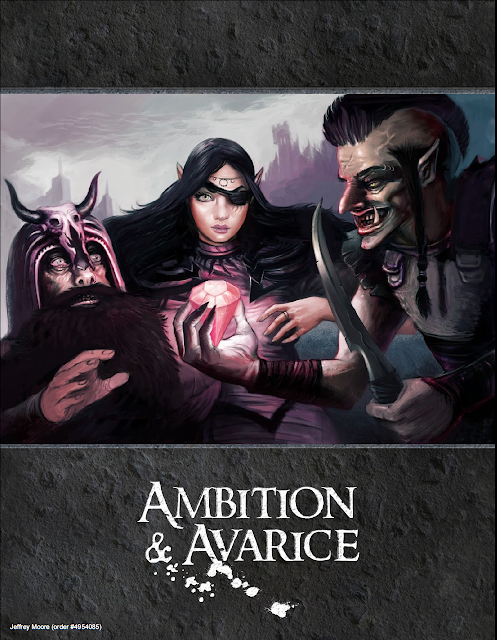 Christmas, 1981. I am 16 years old. I have been playing Dungeons and Dragons since the school year began, but I don't own any of the books. Under the Christmas tree is the Red boxed Basic Rules by Moldvay. I remember vividly the feeling of opening that book for the first time. It was the only connection to this new found passion that I could call upon when not actually playing. I read and re-read those pages hundreds and hundreds of times.

If you are like me and you can remember that special magical feeling you got from reading your first RPG book, then you will know that it is no small amount of praise that I heap upon Ambition and Avarice 1st Edition by Greg Christopher, when I say, "It felt like reading Dungeons and Dragons again for the first time."

Ambition and Avarice is but one of many, many second-generation OSR RPG's produced in recent years. I use "second-generation" to refer to a game that draws as much inspiration from other OSR products as it does original Dungeons and Dragons, as well as a game that is not meant to be a clone of Dungeons and Dragons but rather something new that still feels familiar and reasonably old-school.

Ambition and Avarice scores high on all counts. It manages to feel like the Dungeons and Dragons that I grew up with and remember fondly from my youth, and yet it manages to do just about everything just a little bit differently. I find myself reading my favorite game again for the first time, and scouring over every page. It's not sufficient just to "browse" certain sections. Every word has value and every little change serves to make a better game.

This is the Dungeons and Dragons of my youth and yet it is nothing like the Dungeons and Dragons of my youth. The fact that Christopher can somehow solicit both reactions from my brain is testament to his skill as a game author. His text is comfortable and familiar but the content is evolved. This game is the perfect example of what the OSR should be doing. Blending the "old" and the "new" to produce something that is only the best of both.

I purchased both the color print and PDF copies of Ambition and Avarice from RPG Now and I would encourage anyone else to do the same. The use of color text throughout the book adds more to its presentation than I would have thought possible. The printed book is just beautiful.

The whole thing is just under 100 pages. This, for me is a boon. I tend to resist RPG books that are much bigger than this. For me, ultimately I want to "play" these games. And for the sake of play I believe in a concise presentation of information. Ambition and Avarice hits that "sweet spot" for me.

As I said, I found myself reading every word of this as if I were learning about RPG's again for the first time. The INTRODUCTION contains some of the best, most usable advice for both players and referees that I have read. The analogy to role-playing as "sport" rather than as a "game" was refreshing and useful. Christopher pretty much had me hooked from the first page.

CHARACTER CREATION begins with the expected six attributes, these can be generated a number of ways. The attributes themselves are well presented and everything is explained well. There are a few new things here. Under Constitution we are introduced to the "Rest Die" which is the die you roll to determine how many lost hit-points you are able to recover after a night's sleep. I also liked the explanations of language and literacy and their connection to the Intelligence attribute.

Next we have character RACES. The standards are here, and more. The way Race impacts your character and the way you play the game, much of this is new, and for me every change made perfect sense. Saving throws for example are based on Race, not Class. As is your character's Hit Die.

There are 10 Races total, 5 civilized and 5 barbaric. The referee can opt to limit a campaign to one Race subgroup or the other, or melt them all together. The variety of choices is something that OSR products of the past have often shied away from. Here, variety is abundant, without increasing complexity. The division of the Races reminds me of the "Hoard" versus "Alliance" division in World of Warcraft. I could see a group playing an Ambition and Avarice campaign set in the world of Azeroth quite easily.

There are also 10 CLASSES to choose from, 5 mundane and 5 magical. There is no limitation of Race / Class combination so 100 different possibilities exist. Magical classes can cast spells, Mundane classes cannot, but have a small number of "character points" to spend on DUNGEON THROWS. Each class has an "Expertise" a special task that defines your class, the ability to "Identify" some specific thing unique to each class, "Proficiencies" which define combat training, and "Companions" which specify a type of NPC follower that your class can acquire.

Dungeon Throws are like skills that are defined in the same way as Saving Throws are in other OSR systems. Everyone has the same set of six of these: climb, force, locks, notice, sneak and traps. But each of varying ability based on the character's class.

Spells are defined by level and use the old-school method of Vancian spellcasting, but interestingly the spells like the Dungeon Throws are not defined by class. Each magical class gives you a set of "starting spells" to choose from, just as the mundane classes give starting scores for Dungeon Throws, but beyond initial character creation, the selection of spells, or development of Dungeon Throws is left entirely to the player without restriction.

Proficiencies define the weapons you are skilled at using and anyone has the option to learn more by either spending character points or through play by using the weapon (and suffering the unskilled penalty) for a period of time in actual combat. Any armor can be worn by any class. There are no "armor proficiencies." But, armor can negatively effect Dungeon Throws, and cause spell failure.

The spell descriptions themselves are another highlight of the game. It seems like every spell is new and unique, yet familiar. Like everything about Ambition and Avarice, it felt like reading Dungeons and Dragons for the first time. Spells are different and new, but they feel familiar and right. Nothing here had me scratching my head or questioning the logic of the choice.

Armor class is ascending, so attacks are roll d20+ vs. AC. Other rolls work the same whether they are Saving Throws, or Dungeon Throws. Some Racial Abilities use an X in 6 roll, which works for me in making them distinct from the other types of throws. I found all of it very easy to grasp and comfortable. I wonder how much of this is my old-school background, and how someone who's first experience with Dungeons and Dragons was 4th edition might view the game.

There's some new rules on drugs and toxins here that I really liked. There are rules for creating and reskinning monsters, but no monster lists within the game. As an OSR compatible product, I don't see this as a problem. There are plenty of monster books available to steal ideas from and good advice here for keeping things fresh. Magic Items are also lacking here, but again I don't see this as a problem as numerous sources for these things already exist and these omissions have helped to keep the page count of the game down.

All in all, Ambition and Avarice may be the best OSR product I have bought. It combines diversity and simplicity with a Dungeons and Dragons "steak and potatoes" like flavor that's unmatched by any other RPG that I've read ... And, I can't stop reading it! It's made my old familiar game feel new again and I can't recommend it highly enough.