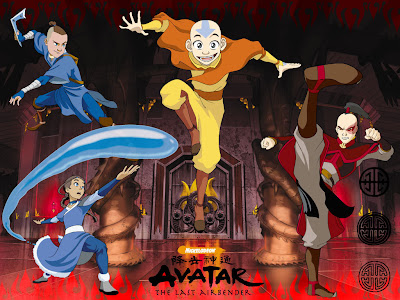 Okay ... So, my friends and I have decided to play a campaign based on Avatar the Last Air Bender and I have decided that I want to use AGE (Dragon Age RPG) system to run it. I realize the Bending is a Martial Art, but I think using the basic rules for Mages will work fine. A Mage's Arcane Lance Ability can take the form of any number of standard elemental bender attacks and can be used without mana cost while more elaborate effects can be paid for with mana using the existing magic system as a guide.

I was going to create a bunch of background tables, but that really proved to be a chore. I came up with some alternate character creation rules and got rid of the random. My players know what they want to play, so I will just let them make their own.

The campaign will take place in the years immediately following the conclusion of the 100 year war.

WATER TRIBE
Hero of the Northern Water Tribe
You are from the Northern Water Tribe and fought in the battle to defend your home against the Fire Nation. You were just a rookie then and had never seen a real combat, but your tribe persevered against the Fire Nation, and now you and many other young people who fought in your tribe's defense are respected war heroes.

FIRE NATION
Fire Nation Soldier
You fought on behalf of the Fire Nation. You saw the damage that the Fire Lord was doing and did what you could to minimize that damage. Orders were orders, but ultimately you knew that what you were doing was wrong. You only hope that the world will give you a chance to make things right.

Fire Bender (Fire Nation Elite Soldier)
You are a mighty Fire Bender. You honestly believed that uniting the world under one rule was a righteous and noble pursuit. You fought along side the Fire Lord, and you lost. Now you see the devastation that the war has caused and you realize that the price was too high.

EARTH KINGDOM
Omashu Survivor (Earth Kingdom)
Omashu was a proud earth kingdom city, second only to Ba Sing Se. It was occupied by the Fire Nation during the latter days of the 100 year war and it's name was changed to New Ozai. You saw many atrocities during the months of Omashu's occupation and these visions of war and the evils of the Fire Nation are still fresh and raw for you.

Earth Bender
You are an Earth Bender who fought against the Fire Nation. You stood along side the Avatar's forces on the assault of the Fire Lord's palace. You are proud of your accomplishments and hope to one day become as renowned an Earth Bender as the legendary Toph Beifong.

What do you think of my ideas? What do you think of using AGE to play in the world of Avatar the Last Air Bender? We are going in bare bones and making stuff up on the fly ... I'd love to see someone do a full blown Avatar AGE source book. I think the mechanics of the AGE system from Backgrounds to Stunts would work with Avatar perfectly!