A Closer Look at the Process ... Dedication Page 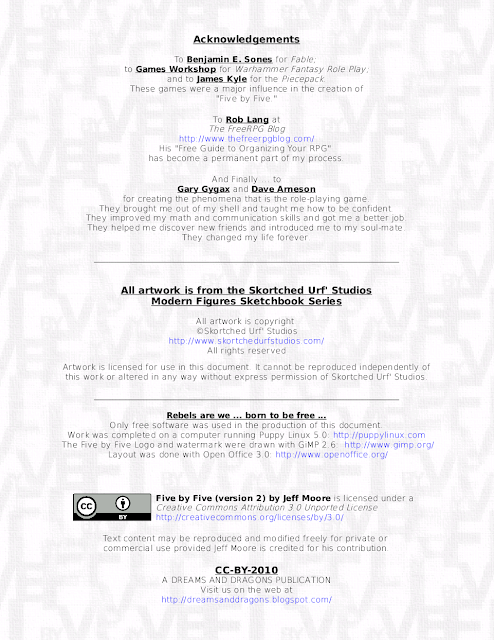 Rob's Free Guide to Organizing Your RPG recommends that following the cover the very next thing you put in your RPG is the Contents Page. I agree with this assessment, but it is also perhaps the very last thing that I will actually produce during the creation process. So, for now I have inserted a place holder and a page break. We will come back to the contents page later.

The Guide next recommends that your RPG has a "Thank you / Version / Dedication (TYVD)" page. It also says this is optional, but I am not sure that's entirely true, because it also seems like from Rob's example that this is where your copyright information should go. He even says "Always put a version on and a date." So, that doesn't seem so optional and shouldn't be ... so, Dedication Optional? -Yes ... Dedication PAGE Optional? -No ... you need to include a version and date for your work, even if you don't want to write any thank you's.

As it happens, I had a lot of thank you's I wanted to make and ended up paring things down to get it all to fit. I also needed a place to put the copyright/licensing notice for the artwork and chose to put it here. Add to that the creative commons license that I will eventually be placing all my works under I now have a pretty full page.

I've titled the page: Acknowledgments rather than Dedications, but it's the same thing. To begin with I mentioned the two games whose design have the greatest influence on the creation of Five by Five. Those would be "Fable" by Benjamin E. Sones and Games Workshop's "Warhammer Fantasy Role Play."

Ben Sone's Fable is a free RPG. You can get it from John Kim's Free RPG's on the Web and nowhere else that I have been able to find. It appears that John is hosting the game for its original author. John has Fable listed in the "rules-lite" section of his site. Fable is sort of a Risus style "choose your trait" RPG. It's crunchier than Risus and does some fun things with dice and combat so I was motivated to give it a try. I played a handful of sessions of Fable with my friends and liked it enough that I began work on "my own version" ... this is what became Five by Five.

If Fable is to be credited for the "choose your trait" nature of Five by Five's character definition, then the combat system and in fact Five by Five's entire basic mechanic comes from Warhammer Fantasy Role Play. It's simply this. Everything has a value on your character sheet. For every task find the relative value on your sheet and roll equal to or less than that number. It was clean, easy and fast. No arbitrary difficulty numbers and no math, just roll and go. Some may criticize the mechanic as too simple (or even broken) but it remains one of my favorite game systems. It's just so effortless.

I find that when we bring a game to the tabletop, eventually we all become game designers after a fashion... taking our favorite bits from various games and incorporating them into whatever game we happen to be playing at the moment. It's in the spirit of these house-ruling moments that Five by Five was built. It's really little more than a mash-up of Fable and W.F.R.P. It's only fitting that I acknowledge that fact on my dedication page.

About the only original thing (at least in the RPG world) is the way that Five by Five deals with a six-sided dice, creating a "d5" ... but even that can be traced to inspiration from another source. James Kyle invented and released to the International Public Domain a set of components for a board game called, "Piecepack." Piecepack is to a board game what a deck of cards is to a card game. Generic components easily available to anyone, but with no specific rules. When you buy a deck of cards, you aren't buying one game ... you are buying the means to play many games. That's what Piecepack is.

Piecepack has among its components four six-sided dice, but these dice aren't numbered 1 through 6; they are numbered Ace (1) through 5 and one face is left blank. The blank face is referred to as a Null (0). I am sure it was in playing with the Piecepack and attempting to create an RPG style board game in the spirit of Milton Bradley's Hero Quest that the 5x5 die roll (where Five by Five gets its name) was born. So a tip of the hat goes to James Kyle and Piecepack as well.

Next, I thank Rob Lang. He's the reason you are reading this now. I have made Rob's Free Guide to Organizing Your RPG a permanent part of my creation process. Plus Rob has been a major champion of Free RPG's these past few years. He's a real life Free RPG Superhero.

And last I wanted to thank the guys who started it all, Dave Arneson and Gary Gygax. Really, without them, my life would be so much different ... I can't even imagine it ... it would be a life as bleak as that one created when Cordelia had wished that Buffy had never come to Sunnydale. Gary and Dave have made my world a better place.

I put the licensing stuff for the art I bought from Skortched Urf' Studios next. I would love to use all "free" components in my projects if I could ... but good art of abundant and consistent quality is pretty hard to scratch up for free, and it's really amazing how inexpensive art packages like this have become.

Last it's my own creative commons notice of ownership and attribution. I had to go back and sneak in a version number after re-reading Rob's Guide. But, that was the only important bit I had forgotten.

So, there we have it. Step by step through my Dedication Page. A graphic copy of the page appears above and if you click on it you go to a slightly larger copy that is quite legible for those who want to see how things are turning out.