One project that has been tickling the back of my brain for some time has been a revamping of TSR's SAGA system. I really like these card based rules and have wanted to do something with them for a long time. That interest in fact is responsible for the Sky Ace and Royal Battles games that I created. 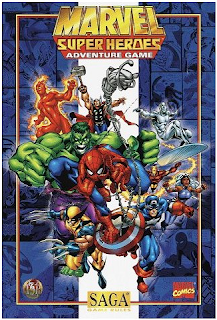 Given the surge of abandonware rules systems that I see being reborn as free projects on the web: Microlite74, Swords and Wizardry, 4C, Mini Six, Legends of the Ancient World, etc, etc ... I have decided to give a recreation of the SAGA System a serious go.

I had already done some of the basic prep work some time ago and adapting the rest from here should be a snap. The challenge of recreating SAGA is in the cards. Both TSR game sets (Dragonlance 5th Age, and Marvel Superheroes Adventure Game) used custom card decks with special elements. I have examined the special aspects of the SAGA decks and applied these to standard playing cards. I feel that this was the greatest challenge facing any rebirth of SAGA and that I have managed this quite well.

Below is the first bits of text from the Saga 54 RPG.

Saga 54 is a role-playing game inspired by an innovative playing card based RPG published in two different game sets in the mid and late 90's respectively. These rules sets required special cards to play at the time, but Saga 54 uses a standard poker deck with the two Jokers included for a total of 54 cards.

Saga 54 is an RPG rules-lite tool kit. It assumes that players are familiar with traditional tabletop role-playing games.

Numbered cards (2-10) can be divided by suit symbol in the traditional way. All face cards (King, Queen, and Jack) plus Aces and Jokers ignore the suit symbol and comprise a fifth suit called Faces.

The Faces suit is 18 cards, each of the other suits are 9 cards a piece.

Except for Faces, the suits are based on the tradition suit symbols but are given new names:

Numbered Cards are worth the number on the card. Face cards (all cards in the suit of Faces) are worth 5.

In addition to number values and suits, all cards also have an aura.

Aura is based on a card's color, but again the cards in the Faces suit are special and are considered colorless.

The colorless cards (Faces) have no aura and so are NEUTRAL. (18 cards)

Red cards (with numbers) have a POSITIVE aura. (18 cards)

Black cards (with numbers) have a NEGATIVE aura. (18 cards)

All characters are defined through four base abilities that serve to define mental and physical traits. The four abilities match the four suits.

That's it for now ... If you happen to 0wn the Marvel Superheroes Adventure Game, you can now play that game using a standard card deck. All elements of the fate deck are there. Faces represent the suit of Doom and all the rest should be pretty self explanatory. With the Fate Deck taken care of, presenting an updated version of SAGA should be a snap! Feedback is welcome!!